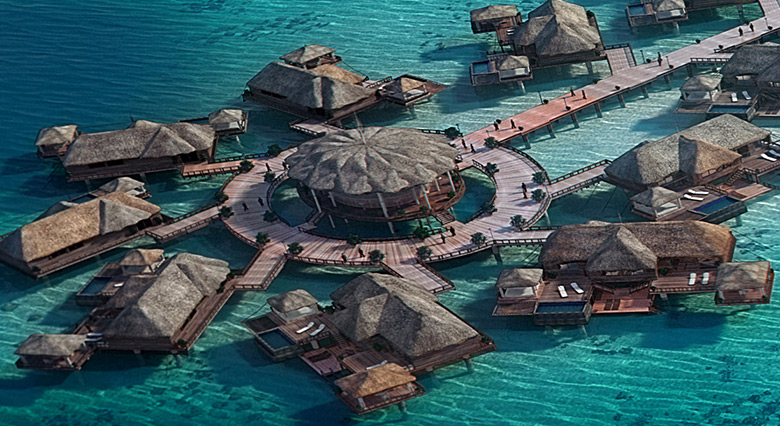 Project Overview: From Maldives with Love

This 3D rendering of Malives was inspired by my last trip to there. As they are many small islands the far away ones can be reached with the air taxi planes. From the sky I was amazed by the beauty of this place, the air is so clear that you can see far away. When is sunny you can see the small caustics, the transparency of the water, even a lot of underwater rivers and canal of the reefs. I wanted to recreate this in the 3d.I worked with Maya for all of the modeling, objects, trees, water, bungalows.. , rendered with Vray for Maya. The clouds were made from Vue. The challenge was to render all of these millions of polygons with the usage of GI (global Illumination) and refractive caustics. I was using reference pictures, from where I can observe the colors, lighting, how the contrast and brightness is changing with the depth etc…

I started with the modeling of one house. Adding small elements, path walks, trees, pots, people, boats, flags, corals… After the whole modeling and placement was done, I started placing the lights. Vray sun and sky was used for the lighting model. Also physical camera attribute was attached to the normal camera. I chose cylinder lens distortion to make more Grande and far away angle for the shot. The vray sun (directional light) was casting the refractive caustics. Then I realized that the rendering time went way too far, so I decided to separate the scene in 2 parts: 1st is the water with the water bungalows. The second is the all the trees, huts, props over the islands. In that case I could render the 2nd part without the caustics turned on (because they didn’t need them), which came out pretty fast. Later all of the rendered passes were composed together in Fusion with the sky from Vue.
From the rest of the pictures:

That’s how the beauty pass looks like, its lacking variation, depth…

Following pass images is used to multiply some of the edge parts of the image, put more depth of the details.

Depth pass is used to make better depth with the distance. This also helps to separate the different objects better.

This is only the refraction pass. Because of the big scale of the whole image, I had to make the diameter of the light pretty big and the resolution of the caustics rays very big to be able to capture the beautiful details of the projected on the ground.

I was playing with different transparences for the water fog. In general the water in Maldives is very clean, but it’s still blue from the sky, so I managed something in between both images.

This RenderID pass was used like alpha to be able to change and put some color variations of the separate objects.

this is the final composed image with big resolution.

This 3D rendering of Maldives and its tutorial have been published by Duncan Evans – Digital Mayhem 3D Lanscape Techniques: https://www.crcpress.com/Digital-Mayhem-3D-Landscape-Techniques-Where-Inspiration-Techniques-and/Evans/p/book/9780240525983